An area of research we never hear too much about anymore is the two "mystery" planes flying in and around the vicinity during the second "alleged" plane event where allegedly "Flight 175" impacted the South Tower in NY. The FBI were aware of at least one of those two "mystery" planes, as reported by Jennifer Spell a videographer who captured the "mystery" plane in the background as "Flight 175" crashed into the South Tower in her video footage. She provided the FBI with a copy of her video which showed a "second" plane parallelling the "alleged" United Airlines "Flight 175" plane. To my knowledge nothing more was ever disclosed to Jennifer Spell by the FBI (during their visit for a viewing at her home of the video footage) as to what the second plane was doing in that area at the time of the plane crash into the South Tower. 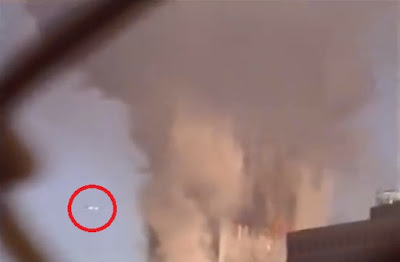 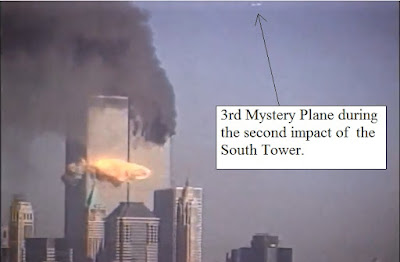 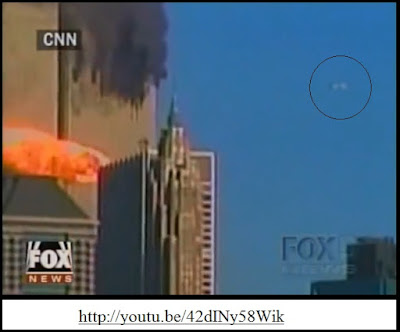 A 'Camera Planet Archive' video also captured a close-up of the "mystery" plane. See below: 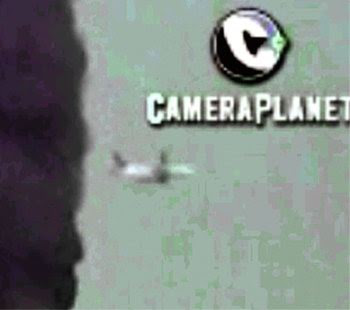 Many researchers have tried to explain this mystery airplane as the "Doomsday" airplane. The "Doomsday" airplane was a different shape and and was mainly white in colour with a black stripe running down the middle of the plane, and without any black markings on the wings or tail section of the airplane as seen in the mystery plane images above captured in the South Tower event in NYC.

The fact that the "mainstream media" made a big story about a mystery plane in the Washington area, where they correctly reported it as the "doomsday" airplane could indicate some type of "perception management" to play down second "mystery" plane's presence in NYC. 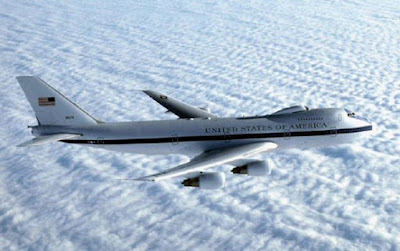 See Video from 12th September 2007 from Anderson Cooper's 360 program, where they re-visit the "mystery plane" that flew over the white house on 9/11.
As stated in the news report '9/11 Commission' co-chairman Lee Hamilton said, "he had a vague recollection of someone mentioning of a mystery plane" however yet the staff who looked into it didn't raise it as an important issue to investigate it, and wasn't raised for discussion. Was they referring to the Washington mystery plane, or mystery airplanes in NYC also, as there was at least two mystery airplanes in the vicinity during the South Tower event. See images below: 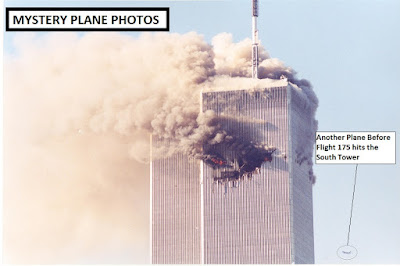 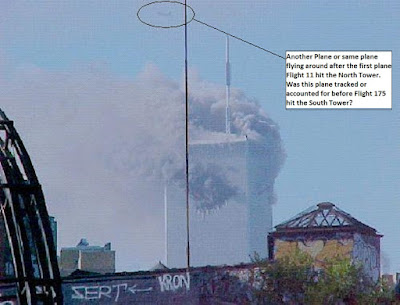 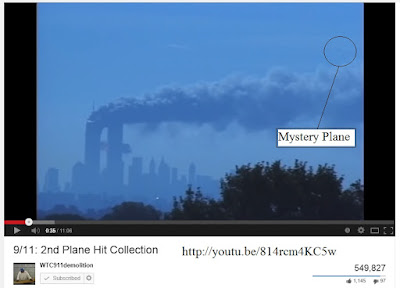 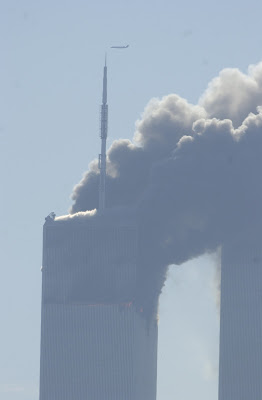 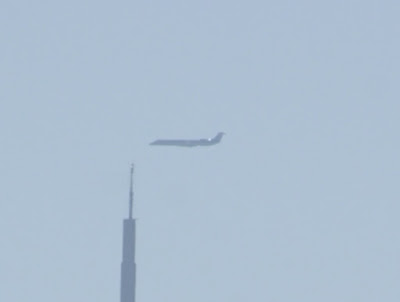 So we have two mystery planes that were captured in other videos and photographs in and around the NYC area during the second "alleged" plane impact into the South Tower. 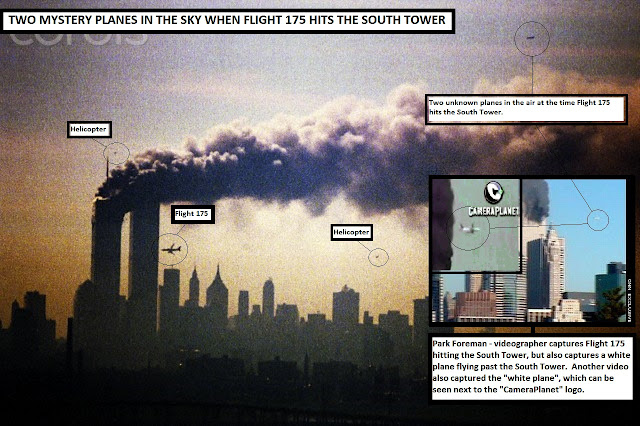 Why didn't we hear anything about the existence of these mystery planes in NYC? Was the story used by CNN to confuse or play down the issue in relation to the existence of the mystery planes in NYC, or to confuse people with the Washington "Doomsday" airplane sightings, which one might of expected in light of the events in NYC, that such a "Doomsday" plane would be flying around in the Washington area?

Another unusual object flying-by during the 2nd plane impact event was captured in Fox News' "Chopper 5" video. The flying object is moving at speed in the opposite direction? It doesn't appear to be picked-up by other videos or photographs. What was this object doing? Is it a helicopter? Or was it dumping debris?

Image Projection & Holographic Projector Technology...
Hypothesising: Because of all the "strange" anomalies captured in the second plane crash videos of the "alleged" Flight 175 airplane, such as; disappearing wings, no collision on impact with the building, explosion happening after the plane had already entered the building and no apparent debris falling to the ground of the plane along with no breakage of the tail section on impact and impossible plane speed. 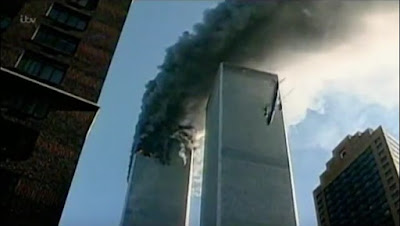 Explaining these anomalies has always been promoted via way of "video fakery", which has several issues in its theory. My personal hypothesis suggests similar to a hypothesis first put forward by Richard D. Hall in 2012, regarding a drone flying parallel to Flight 175 projecting an airplane. This was mainly suggested because of the anomalies in the military radar data which showed the plane's coordinates 1500 feet to the side of the civilian radar data plane path.

My suggestion to the drone theory flying to the side of Flight 175 would be to ask the question; were those two unidentified "mystery" planes involved in some way deploying some type of "image projection" of a plane, which is why the existence of the two "mystery" planes was never investigated fully or discussed publicly by the 9/11 Commission? 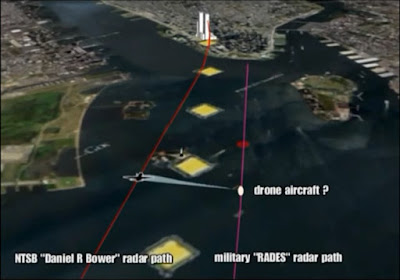 Airborne Holographic Projector which has been talked about in various manuals and articles. See below: 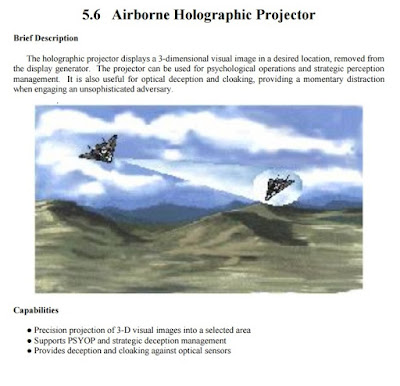 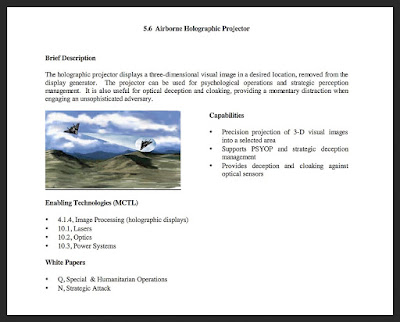 Also this 'Washington Post' article talks about a secret program established in 1994 to pursue technology of a "holographic projector" for deception purposes. The article certainly gives us a glimpse of the thinking in military circles for weaponry of a different kind. See below: 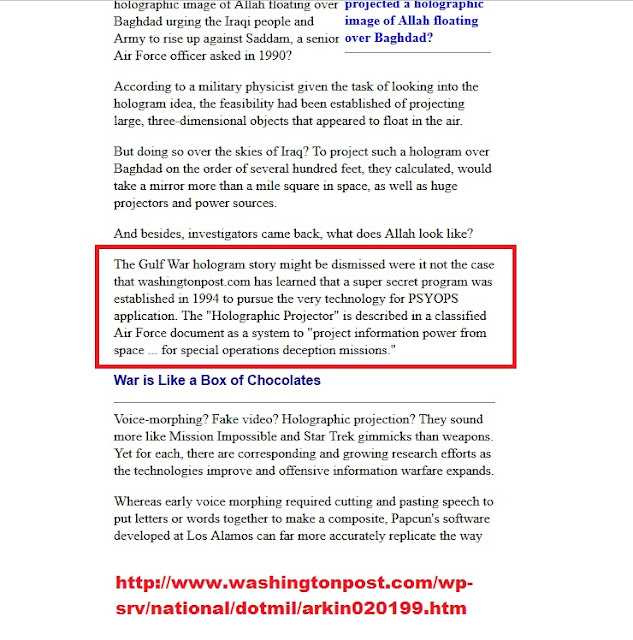 And again also discussed in this article below: 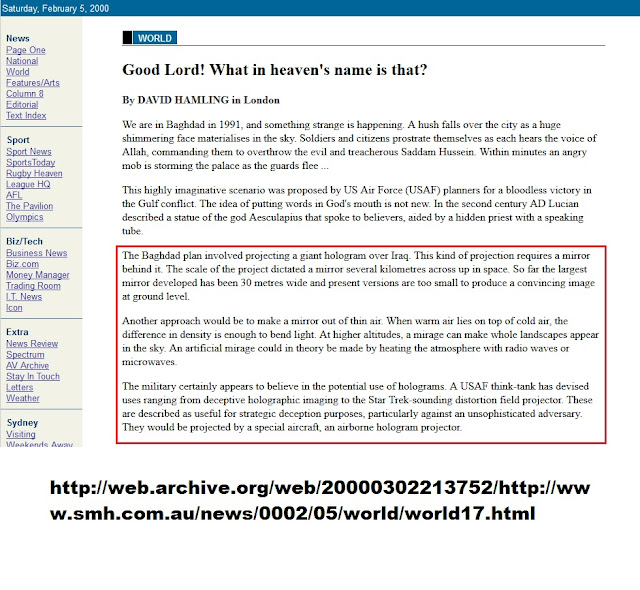 Video fakery cannot explain the anomalies sufficiently which I have pointed in several articles in the past, and in some cases appears to be used as a distraction or some type of "psychological operation" by the likes of Simon Shack and Ace Baker. Video fakery cannot account for how they could control the many hundreds of people who seen a plane in the sky hit the South Tower. Plus, how did the perps have "complete" control over the video and photographic record in the whole area of NYC without the possibility of at least one or two videos/photographs slipping through the net showing no-plane hitting the South Tower? This has never been fully explained by Simon Shack or Ace Baker when they are promoting the "video fakery" theory. With "image projection" technology such as technology mentioned above, the perps would not need to have "complete" control over any of the eyewitnesses, photographers or videographers, which could limit the people involved to a small few in carrying out the event. By carrying it out this way using such technology can also explain the lack of plane "crash physics". I think the possible use of an "image projection" technology explains the anomalies far better as a hypothesis than does "video fakery", especially with the possible involvement of the two mystery planes which has not been fully explained to this day. I'm not saying this is how it was done, or if they were even involved, it is just a hypothesis put forward and I'm open to change it as and when I gather new evidence in my investigation and research.


Thank you for reading and caring!