The Disappearing and Reappearing Wing Study

In this study analysis I am going to compare two videos which captured an anomaly involving "alleged" Flight 175's plane wing briefly disappearing before impacting the South Tower. I will also explore some of the most common explanations which have been put forward to try and explain these anomalies.

Many 9/11 researchers have tried to explain away some of the anomalies captured in the "Flight 175" videos. One such case is the video footage showing the plane wing disappearing in some of the videos.

Some researchers believe that video compression was responsible for the plane wing's disappearance, while others say it is because of the background and the sky. To some degree these can be valid arguments put forward. To demonstrate these two points I have used below two videos taken of regular planes in the sky to demonstrate how these two factors affect the video camera's ability to register the "real" plane's wings and tail section depending on the colour of the sky and also the colour of the plane itself. See below: 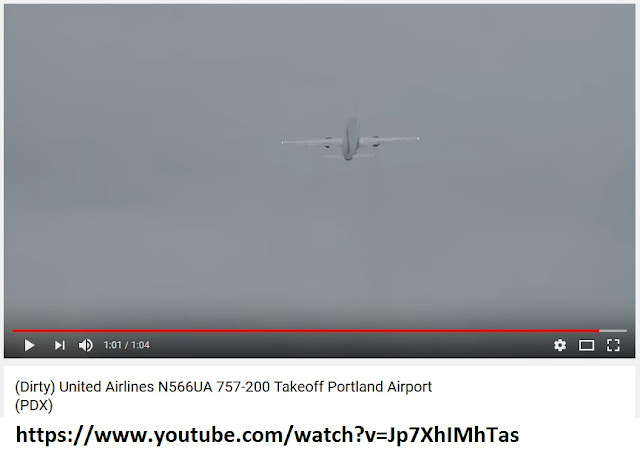 As you can see in the image above taken of a "real" plane, the sky is grey and the colour of plane is similar in colour which makes it difficult for the video camera to differentiate, however we still see the wings and tail section in the video.

In the video below taken of a "real" plane you can see that for one frame the tail section's left-hand wing looks transparent, almost disappearing. The merging against the blue sky demonstrates a natural transparent looking plane wing for one video frame. So it is possible for this anomaly to happen in video footage and give the appearance that the tail section wing has disappeared, so this is a natural anomaly, laws of optics, not a fake video or CGI plane. ﻿ 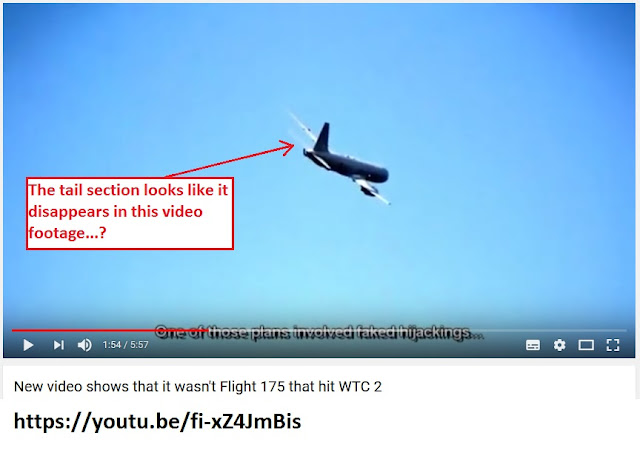 The difference in the next two examples below is, it shows neither of those two explanations above can account for the disappearance of the plane wing documented in the two pieces of 9/11 video footage below: 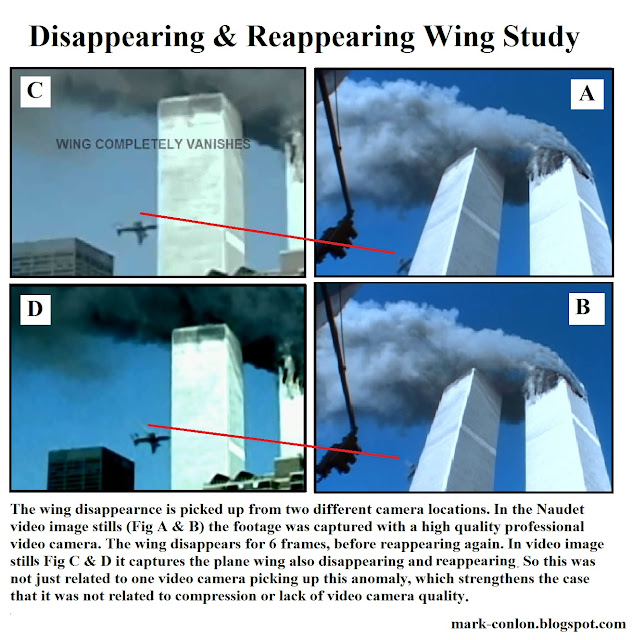 The difference with this study is the videos are taken from two different directions and using two different video cameras both capturing the same missing wing anomaly. This proves that this was an anomaly captured from the "perceived" object in the sky and not an anomaly or malfunction of the video camera recording equipment itself. So then explanation of compression or sky backdrop and light can be ruled-out. Not in (Fig A & B) this was captured using high quality video camera equipment, and in (Fig C & D) the video camera was of a lower quality, and only captured the missing wing for one video frame only. 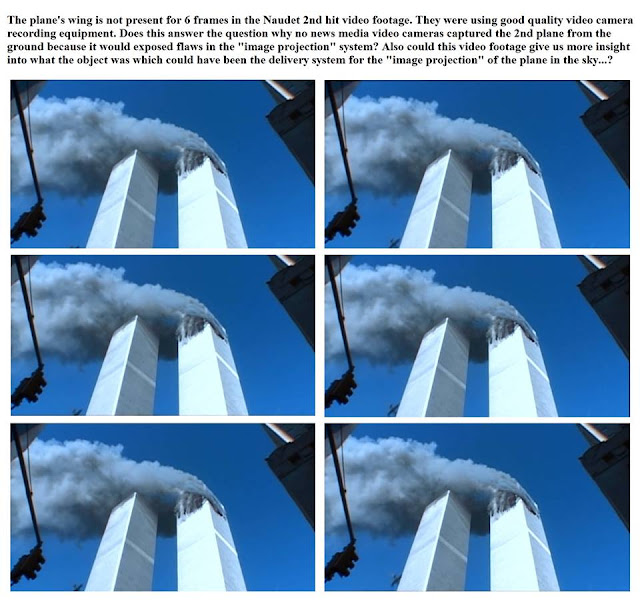 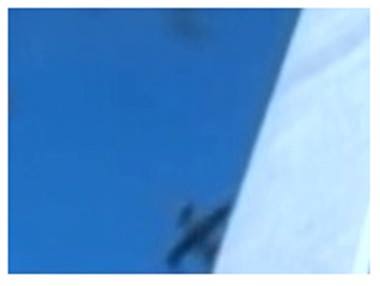 Over the 6 frames it shows no wing after the plane engine. The footage was taken using high quality video equipment. Was this why it picked up the missing wing for 6 frames instead of only one frame in the lower quality other video camera footage showing the plane wing missing? Was the high quality video recording equipment key to capturing this anomaly of the "perceived" object in the sky? Was this why we have never seen any professional news camera crew footage of the plane from the ground on 9/11? Were the news camera teams kept away in case they captured more anomalies like this of the plane in their higher quality equipment?

Below: Luc Courchesne was using professional video camera recording equipment and he also captured the missing wing anomaly in several frames in his video footage.

In this case it could be that the shutter speed of the video camera was open for a shorter period of time, example 1/60th of a second as the video camera was facing into the sunlight on the east-side of the sky. Because of the camera's shutter being open for a shorter time-frame did it catch the "image projection" of the plane in mid drawing of the projection, thus "not" displaying a full image of the plane in the sky? (Example, if you imagine a strobe light, which flashes quickly and capturing it in between cycles of light and dark phase).

Also we must take into account the high quality of the video camera used, which would have played a major role in capturing the anomaly, as it captured several frames not just one frame of the missing wing like other video camera's of a lower quality and with a longer open shutter speed exposure.

Conclusion:
What I can positively conclude is, we are NOT looking at a "real" plane captured in the 9/11 video footage, and the anomalies were NOT caused by compression artifacts or video malfunctions. The anomaly issues are with the object itself in the sky which were captured by numerous video cameras from different locations, thus depending on the quality of the video camera and the location perspective of the video camera would explain to some degree how the anomaly (missing wings) would have been captured in the video footage.

Impossibility of Video Fakery, CGI Planes & Compositing...?
This also definitely rules-out any suggestion of inserted CGI graphic planes or composited planes into the TV media footage or the amateur video footage later. Why would the perpetrator's insert CGI planes which were NOT convincing enough or full of glitches? this is just not logical. Also how did they control all of the eyewitnesses in NYC of those who witnessed a planes hitting the buildings, and please note; before even seeing anything on TV or media coverage? Impossible. Yet we have NOT seen any videos put into the public domain showing no plane at all in the video footage, one would have thought at least one video over the last 17 years would of surfaced or slipped through the net of control depicting such claims made by the "video fakery" promoters. No matter what anybody tells you their are reliable witnesses who seen what they took to be a plane in the sky and hitting both buildings. The "video fakery" promoters never confront this issue, only to make empty accusations calling all the eyewitnesses, videographers and photographers liars or being part of the a big conspiracy. They provide no credible evidence to support their "bogus" claims.

Thanks you reading and caring!

Here's another study I have done. The video shows the wing disappearing for 6 frames. 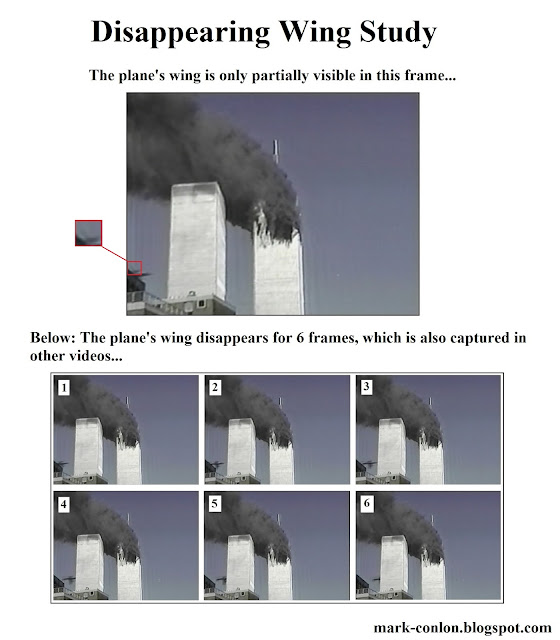 Mark Conlon Blogspot
I am an independent research blogger. I started my blog initially in September 2013 to publish research findings into the "No-Planes" theory and video evidence of 9/11. The inference I concluded from my analysis and research was, that “video fakery” did not explain the number of anomalies captured in the ‘Flight 175’ videos such as; impossible crash physics, impossible plane speed, missing wings and eyewitness accounts. It appeared the “video fakery” explanation was promulgated to cover-up the use of an advanced image projection technology that was used at all 4 airplane events, and some prominent 9/11 researchers were positioned to facilitate the cover-up. In September 2017 I appeared on Richard D. Hall’s TV Show to discuss my research findings alongside Andrew Johnson. This led to Chris Hampton contacting me to be involved in research for his 2018 documentary film – 9/11 Alchemy “Facing Reality”. I also did further research into the Jo Cox murder whereby I was featured in Richard D. Hall’s 2019 documentary film – Exit from Brexit “The Jo Cox Departure”. Currently I am researching what happened to the "real" airplanes on 9/11.