The Hidden Connections of the 1984 Film, War of the Worlds, UFO Alien Invasion, Holographic Technology & 9/11

Here's some interesting connections that Rik Clay made in 2008 between the War of the Worlds (alien invasion), 3D Holographic technology, Actor Richard Burton (actor in the original 1984 film), and the 1984 Olympics games closing ceremony.
The hidden connections of 1984, War of the Worlds, UFO Alien Invasion and holographic technology.
An interesting fact is, in 2007 the first public demonstration of 3D holographic technology in a theatre stage production, was in the 'War of the Worlds' stage show. (The story of an Alien, Martian Invasion). Richard Burton plays George Herbert, the narrator and journalist, appears in the form of a three-metre hologram. Interestingly, Richard Burton was one of the main actors in the film 1984. https://www.dorsetecho.co.uk/.../1854232.war-of-the.../

Also, the video below from the 1984 Olympics games, which was held in Los Angeles depicts in the closing ceremony, a UFO close encounter with alien contact. Source: https://youtu.be/FdW_4O7u3Gc
My Thoughts

I don't feel all these connections made by Rik Clay are just a coincidence, rather be it a coded message and insight into a future staged event, and also the connection to advanced technology.

In past blog posts I have published information about the 9/11 airplanes events and the advanced technology involved to create the airplane illusions at ALL 4 events on 9/11 using 3D volumetric image projection technology. I believe 9/11 was a mass demonstration trial of such hidden advanced 3D volumetric image projection illusion technology, which to some degree was successful in fooling the majority of public who witnessed the events first hand in real-time in New York and viewers worldwide on their television sets.

Change in the Media's Attitude of UFOs & Alien Threats

In more recent time there has been a big shift in the attitude in the mainstream media towards the ufology subject, from ridicule to a more serious nature. I feel this isn't by accident, it is by design, in a move to implant the possibility of an outside alien threat in people's minds, and to take UFOs seriously. I have seen many reports in the mainstream media of special military units set up in the UK and US in case of an alien threat, and also daytime talk shows discussing the potential of an 'alien invasion'. In my opinion this is merely psychological priming, so people will accept the possibility of an alien threat.

It is my belief that if there is an alien invasion, it will be a staged event using the type of illusion technology myself, ChrisHampton of wolfclanmedia.org and AndrewJohnson of checktheevidence.com, and many others before us have tried to expose involved on 9/11. If anyone has read Serge Monast's writing of Project Blue Beam, it is easy to observe how current (pandemic) and past events are aligning with all the stages of the Project Blue Beam agenda, with a final event being a staged alien invasion, to take control of the population globally. If such an event were to happen, remember - seeing is not believing, it is ALL an illusion.

I am not saying real aliens don't exist, and people's encounters aren't real, but if an alien threat happens in the future, it will not come from aliens themselves, it will be a creation by the powers that be, using the alien threat to further their global agenda, using the advanced 3D volumetric image projection technology I have written about involved on September 11th, 2001.

Thank you for reading and caring...

Posted by Mark Conlon Blogspot at 7:25 pm No comments:

By Mark Conlon
Recently I have been revisiting the late Rik Clay's research. I felt it important to share this relevant observations he made in regard to the number 11 and the 9/11 date of the attacks. 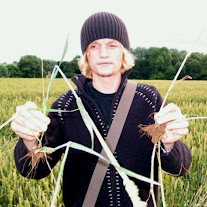 Below, I have referenced 9 observations that Rik made regarding the number 11 and the 9/11 event date of significance.

6. New York is the 11th state of the US Constitution

Posted by Mark Conlon Blogspot at 5:48 pm No comments:

A recent weapons flight test in the Utah desert may change future warfare after the missile successfully defeated electronic targets with little to no collateral damage.

CHAMP, which renders electronic targets useless, is a non-kinetic alternative to traditional explosive weapons that use the energy of motion to defeat a target.

Power is cut to a room of computers after being hit by a high-powered microwave pulse from a Counter-electronics High-powered Advanced Missile Project.

During the test, the CHAMP missile navigated a pre-programmed flight plan and emitted bursts of high-powered energy, effectively knocking out the target's data and electronic subsystems. CHAMP allows for selective high-frequency radio wave strikes against numerous targets during a single mission.

"This technology marks a new era in modern-day warfare," said Keith Coleman, CHAMP program manager for Boeing Phantom Works. "In the near future, this technology may be used to render an enemy’s electronic and data systems useless even before the first troops or aircraft arrive."

Thanks for reading and watching!

Posted by Mark Conlon Blogspot at 2:56 pm No comments:

By Mark Conlon
For those who watched the new  9/11 Alchemy "A Big Idea" documentary film by Chris Hampton of Wolf Clan Media and are interested in the patent I and Chris discussed regarding the illusion technology in relation to the airplanes on 9/11, here's a link so you can study the patent in more depth and its potential uses and claims outlined in the document.
Source: https://patentimages.storage.googleapis.com/ad/27/1c/baede7d8638bd6/US20200041236A1.pdf 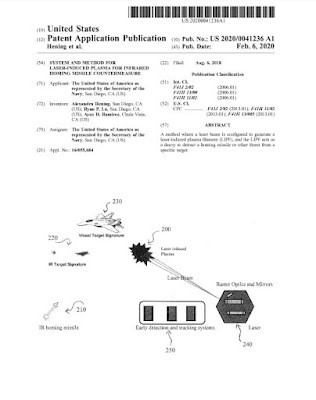 New technology under patent by the U.S. Navy could shift the odds in the favour of stealth aircraft: leveraging lasers to produce plasma bursts that could trick inbound missiles into thinking they’ve found a jet to chase that would actually be little more than a hologram. See Sandboxx video here at this link https://youtu.be/MDSVJfuyJlk, or watch the embedded video below:

Thanks for reading and caring....

Posted by Mark Conlon Blogspot at 1:47 pm No comments:

By Mark Conlon
Here's my original (censored) interview I did with Chris Hampton of Wolf Clan Media in April 2018. I was contacted by Chris in November 2017 regarding my research via Andrew Johnson. This led to me and Chris having a conversation about my research. This also led to me helping Chris with research for his 2018 documentary film - 9/11 Alchemy "Facing Reality". We also developed a good friendship through common cause. I want to thank Chris for his continued support of my research and personal friendship. I greatly respect him as a brilliant researcher himself, and an excellent documentary film maker, who doesn't shy away from the fringe-elements of controversial subjects. This conversation was censored many times on YouTube, even though the video was set to private setting, within hours of its upload. I hope people get something from the conversation and information we cover in the video. Watch/listen to the video here: https://wolfclanmedia.org/mark-conlon-2018/ 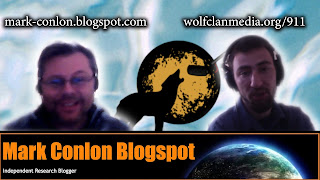 Video Notes: In 2017 Chris Hampton met Andrew Johnson of Check The Evidence, and in 2018 he introduced Chris to a friend of his in the UK by the name of Mark Conlon. This came about after seeing Mark featured with Andrew on a Richplanet TV episode entitled Layer of Deception, (censored) where he discussed the 9/11 airplanes. Chris Hampton first spoke with Mark Conlon in 2018 during the making of “9/11 Alchemy: Facing Reality” a 3-hour documentary. Over the past three years, Mark and Chris have become great friends and spoken many times. This is the very first discussion when they began collaborating on research into the 9/11 “no-plane” theories, an area that Mark Conlon had been investigating on his blog since 2013. Mark Conlon’s research has been continuously censored online since at least 2017. The following conversation was recorded in April 2018.

Thanks for listening and caring!!!!

Posted by Mark Conlon Blogspot at 2:48 pm No comments:

By Mark Conlon
Isn't it interesting that the Daily Star published this today especially in light of a recent disclosure of such three-dimensional image projection technology by myself and Chris Hampton in his new film: 9/11 Alchemy "A Big Idea". 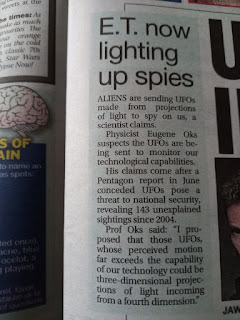 Question: What is at play here in this Daily Star write-up?

The Daily Star indicates to me that they have been ordered to play-down the existence of three-dimensional image projection illusion technology belonging to the military, and attempt to link it instead to aliens? A classic bait and switch!

I, Chris Hampton and Andrew Johnson have been reporting over the last few years regarding the advance three-dimensional volumetric image projection technology involved in relation to the airplane crashes on 9/11. But more importantly WE believe there are implications for the MISUSE of the three-dimensional image projection technology in the future against the public to stage a "Project Blue Beam" style alien invasion to gain complete control over the global population of the world, because of a perceived outer space threat from aliens.

I, Chris Hampton and Andrew Johnson have noted over the past year or so, perhaps even longer, the change in attitude with the mainstream media and governments around the world towards the ufology subject, from ridicule to a more serious nature. This isn't by accident, it is by design, in a move to implant the possibility of an outside threat in people's minds. We have seen reports of special military units set up in the UK and US in case of an alien threat, and daytime talk shows discussing the potential of an 'alien invasion'. This is merely psychological priming, so people accept the possibility of an alien threat. If there is an alien invasion threat, it will be a staged event using the type of illusion three-dimensional image projection technology myself, Chris Hampton and Andrew Johnson have tried to expose which the military have already and used on 9/11.

Serge Monast in 1992 wrote of 'Project Blue Beam'. Once you read the document it is easy to observe how current and past events are aligning with all the stages of the 'Project Blue Beam' agenda, with a final event being a staged alien invasion, to take control of the population globally. If such an event were to happen, remember - seeing is not believing, it is ALL an illusion.

Also checkout Andrew Johnson's article here, regarding what is possibly at play for the future? https://www.checktheevidence.com/.../ufos-the-pentagon.../

Thanks for Reading and Caring!

Posted by Mark Conlon Blogspot at 8:41 pm No comments: 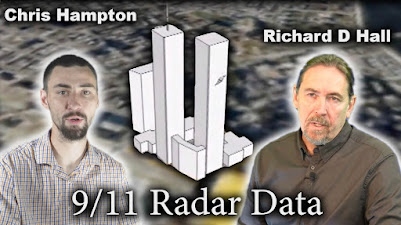 Thanks for watching and caring!

Posted by Mark Conlon Blogspot at 6:09 pm No comments:

Mark Conlon Blogspot
This blog presents my research into the "no planes" theory and video evidence of 9/11. More recently my focus has been researching what happened to the "real" airplanes on 9/11. I have also appeared on Richard D. Hall’s show in Sept 2017, along with appearing on several podcasts to discuss my research into the airplanes. In 2018 I assisted Chris Hampton who made the documentary film – 9/11 Alchemy “Facing Reality”, by doing extensive research for the film. Another area of research I conducted is into the Jo Cox Murder, and I was featured in Richard D. Hall's 2019 documentary film - Exit From Brexit "The Jo Cox Departure". I am currently researching and writing a book about what really happened to airplanes on 9/11. Many thanks for your interest in my research and blog. Please feel free to contact me using the 'Contact Form' in the sidebar.